Joint Letter to ICJ: Myanmar’s Obligation to comply with the Provisional Measures 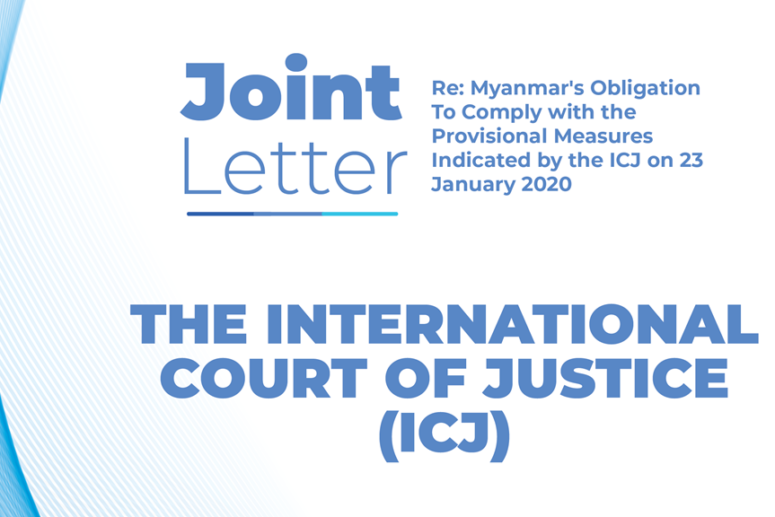 The undersigned organizations strongly support the human rights of the Rohingya people in Myanmar and around the world. We are deeply interested in the pending case Application of the Convention on the Prevention and Punishment of the Crime of Genocide (The Gambia v Myanmar), which concerns a campaign of genocide orchestrated against the Rohingya people by the Government of Myanmar and its military. We welcome the Court’s decision of 23 January 2020 to indicate provisional measures against Myanmar, including the requirement that Myanmar file periodic reports with the Court to describe the concrete steps it is taking to give effect to the Order. We understand that Myanmar submitted its first report to the Court on 23 May 2020.

We would like to respectfully urge the Court to make the 23 May 2020 report and all future reports (including any responses from The Gambia) available to the public on the Court’s website. Our current understanding is that such reports may remain private, available only to The Gambia and to the Court. We fear that keeping the reports confidential will undermine their effectiveness and allow Myanmar to skirt its obligation to comply with the Court’s Order, and its continuing obligations under the 1948 Genocide Convention. The non-public nature of the reports will prevent Rohingya communities and other observers who may have relevant information and expertise from being able to scrutinize Myanmar’s reports and, where appropriate, highlight material omissions or misrepresentations. Without public scrutiny, the reporting requirement may not fulfil its intended purpose, especially given that United Nations investigators are not able to operate within Myanmar.

It is also a simple fact that Rohingya communities may misinterpret the confidential nature of the reports as acceptance or endorsement of Myanmar’s position—or as a sign that the plight of the Rohingya is being forgotten, even as the case advances.

We recognize that the rules of the ICJ do not provide any formal channel for participation by civil society actors. Nonetheless, we hope that our modest request might be given due consideration. Please allow us this opportunity to affirm to the Court the assurance of our highest consideration.

Press Release: The ICJ and The Direction of Rohingya Plight