The European Rohingya Council (ERC) appeals Bangladesh government to show compassion in this holy month of Ramadan and allow two boats of Rohingya refugees stranded at sea to come ashore and receive life-saving food and medicines.

“The Rohingya refugees including children, women, and elderly people stranded at sea could be running out of life-saving food, water and other necessities. Therefore, it is urgently important to save their lives,” said Dr. Hla Kyaw, chairman of ERC END_OF_DOCUMENT_TOKEN_TO_BE_REPLACED 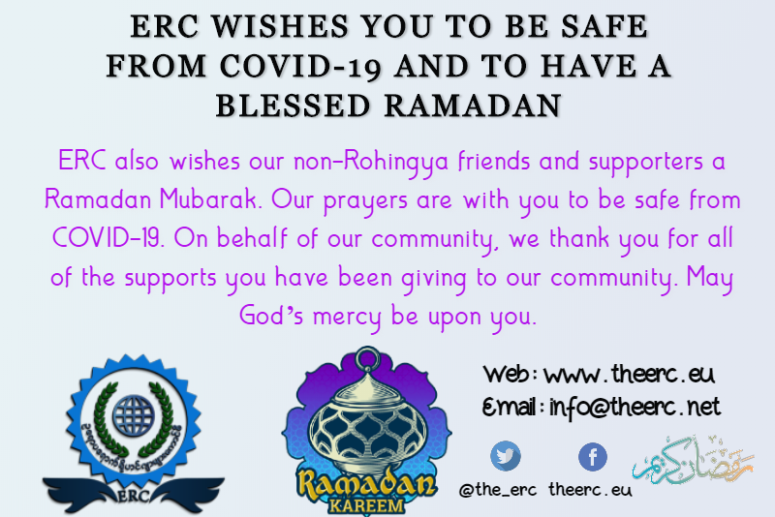 Peace be upon you all. The holy and blessed month of Ramadan is here at our doorsteps. We welcome this noble guest Ramadan. This is the month of blessing where we show our best human qualities such as showing mercy, forgiveness, charity, generosity and solidarity. This is the month of reflection and reckoning of our deeds. We reflect and correct our deeds into the right path.

In this blessed month of Ramadan, ERC wishes all of our fellow Rohingya brothers and sisters around the world to be safe from COVID-19 and to have a productive Ramadan. Our prayers and thoughts are with you who are in prisons, refugee camps, IPDs and in difficult situations in various countries including Bangladesh and Myanmar. We are continuously working for the wellbeing of our Rohingya community.

ERC also wishes our non-Rohingya friends and supporters a Ramadan Mubarak. Our prayers are with you to be safe from COVID-19. On behalf of our community, we thank you for all of the supports you have been giving to our community. May God’s mercy be upon you. 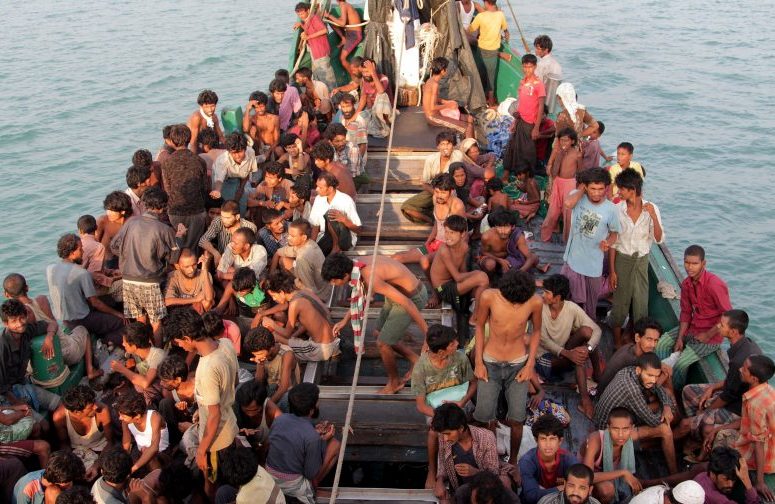 I would like to refer to the incident of Malaysian Navy decision to push back the Rohingya boat to sea on 16th April 2020 as reported by Malay Mail on 17th April 2020.

Amnesty International has reportedly received information about an estimated three to five boats likely carrying Rohingya refugees spotted off the coasts of Malaysia and southern Thailand in recent days, with hundreds of people believed to be on board.

On 16 April, the Royal Malaysian Navy turned back a boat carrying about 200 Rohingya women, men and children, while reportedly providing food to those on board according to Malay Mail. The Royal Malaysian Air Force has cited COVID-19 measures as justification for turning boats away from their coast.

We call on governments in the region to allow them immediate safe disembarkation, especially the Association of Southeast Asian Nations (ASEAN) members to urgently agree to emergency measures to prevent another humanitarian crisis while accommodating governments’ existing COVID-19 restrictions at their borders. We fear that ASEAN will face a new humanitarian crisis while also battling a pandemic.

By pushing back the boats to sea,  traffickers and smugglers who captain such ships would find other ways to enter into Malaysia or neighbouring nations, thus causing us to lose the window to do health screenings for Rohingyas on board and manage the risk of Covid-19 from spreading. Pushing back the boats to sea is a highly risky and miscalculated action which will backfire. It is best we rectify this urgently.

Earlier this week, ASEAN member states issued Declaration of the Special ASEAN Summit on Coronavirus Disease 2019 (COVID-19), a declaration following its virtual summit on COVID-19, affirming the bloc’s commitment to being a “caring and sharing ASEAN Community where ASEAN Member States help each other in this challenging time”. The regional bloc previously committed to “learn from past crises and strengthen the inclusion of migrants”, particularly in emergency situations. ASEAN governments signalled their solidarity in this difficult moment, therefore they must extend their compassion to those in immediate danger at sea. ASEAN states must ensure that policies on COVID-19 uphold everyone’s rights and do not jeopardize people in need of humanitarian assistance and international protection. Malaysia being an ASEAN member has the obligation to fulfil its pledges  and so does all other ASEAN members. ASEAN till today has not been able to effectively address the violence that pushes the Rohingya  people out of Myanmar, where the root cause of the problem originates from.

The UN Refugee Agency, UNHCR, has affirmed that states’ prerogative to regulate the entry of foreigners to their territories cannot – even in the context of a global pandemic – result in a denial of people’s right to seek asylum from persecution. Likewise, the International Organization for Migration stated that human rights obligations and international maritime law must be upheld during the COVID-19 response. This week the Council of Europe’s Commissioner for Human Rights also called on European Union member states to continue to save lives at sea and provide for the safe disembarkation of passengers despite the unprecedented challenge of the pandemic.

Crimes against humanity have continued against the estimated 600,000 Rohingya still living in Rakhine State, Myanmar. And after several waves of brutal military operations in 2016 and 2017, nearly 1 million Rohingya live in crowded refugee camps in Bangladesh, dependent on humanitarian assistance for their survival.

International law imposes obligations on states to protect the human rights of refugees arriving on their shores. Malaysia’s pushback action violates international obligations to provide access to asylum seekers. In this regards, Malaysia could have welcomed the refugees ashore and quarantined them with further health checks.

The principle of non-refoulement obliges states not to return anyone to a territory where they would be at risk of persecution or serious human rights violations. The principle is the cornerstone of international refugee protection and is fundamental to the absolute prohibition of torture and cruel, inhuman or degrading treatment or punishment. The principle of non-refoulement is also protected under general international human rights law, as well as customary international law, which is binding on all states. The ASEAN Human Rights Declaration also includes the right to “seek and receive asylum.” Pushing the boats back to sea has dire consequences and puts the people in continuous torture like conditions on the boats.

Last but not least, we are ever ready to help consult with the government in coming up with a plan for the management of the arriving boat people should the government allow them to land. We give our commitment according to our capacity and capabilities.

As authorities around the world struggle to cope with the spread of COVID-19, it is crucial that States act to protect the most vulnerable, including refugee populations. END_OF_DOCUMENT_TOKEN_TO_BE_REPLACED 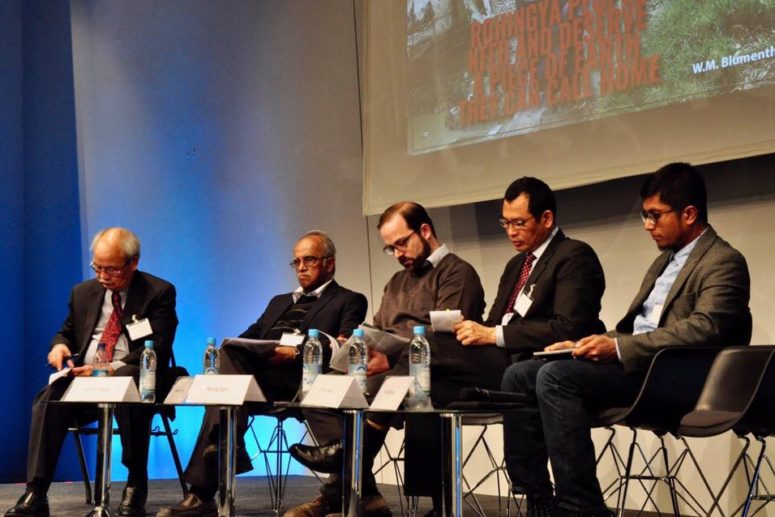 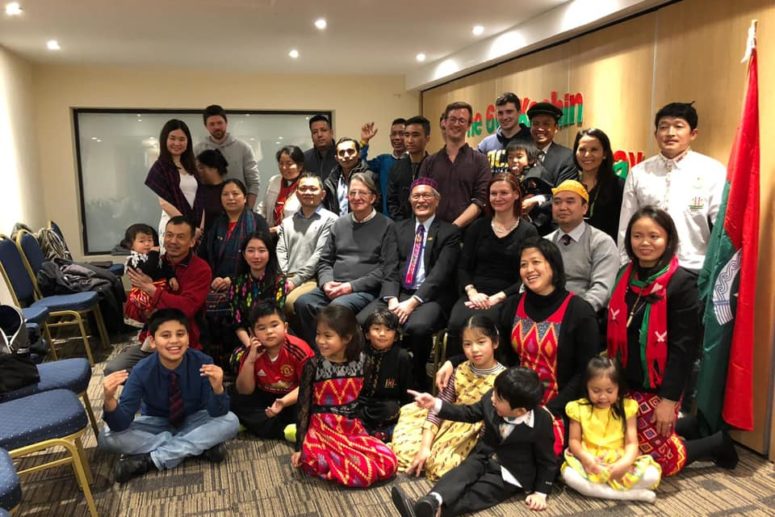 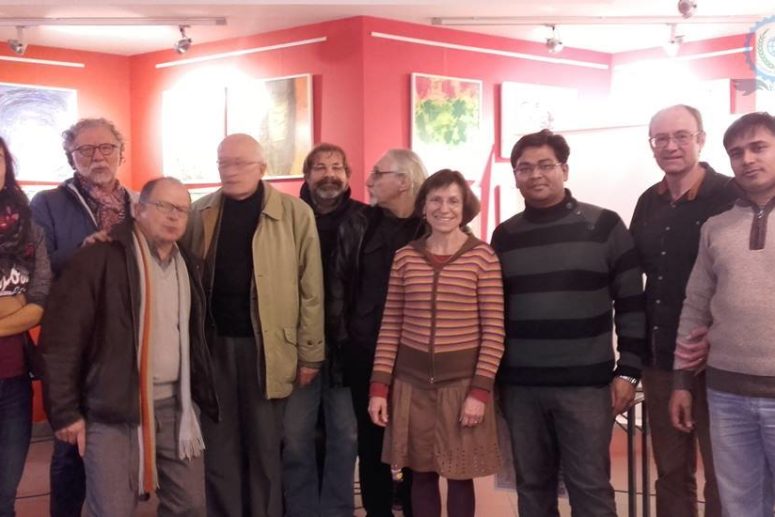 CODE Event – “What is the fate of Rohingya?” 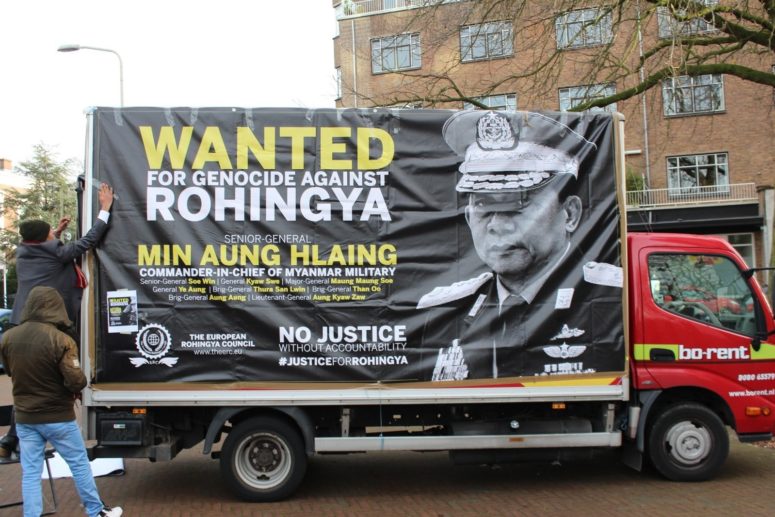 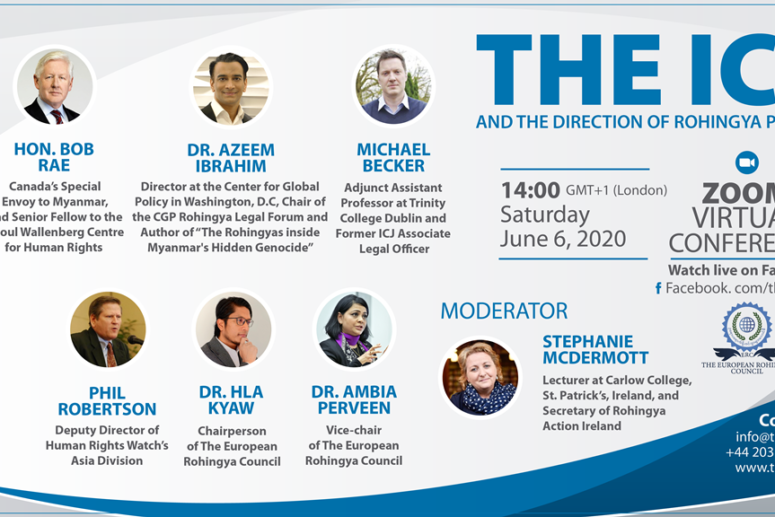 The ICJ and The Direction of Rohingya’s Plight

Over a million Rohingya refugees, living in overcrowded camps in Bangladesh in the midst of COVID-19 pandemic, are desperately waiting for the justice and safe and dignified return to their ancestral land in Myanmar. Furthermore, Myanmar is using this pandemic to delay the repatriation process of Rohingya refugees from Bangladesh to their ancestral land.

The legal action against Myanmar brought by The Gambia is a historic milestone in the long fight for justice and accountability. The entire Rohingya community is following the case at the International Court of Justice (ICJ) closely and they hope the justice will be served in very near future.

However, Myanmar’s request to keep its recent report ‘confidential’ has cast a shadow of despair and a sense of injustice when the victims are not aware of what is being reported in their fight for justice and accountability.

As the world endures the costly burdens of the pandemic which affects every community, the issues of Rohingya’s plight wane away at the global stage and the Rohingya community itself feels their plight and justice being forgotten.

In this virtual conference, we would like to invite renowned scholars, experts and activists who are unparallel knowledge and expertise on the issues of Rohingya. The conference, the first of many, will steer the community away from the fading hope to the direction that Rohingya seek – for justice, accountability and safe return to the ancestral land.

2. Dr. Azeem Ibrahim
Research Professor at the Strategic Studies Institute, U.S. Army War College, a Director
at the Center for Global Policy in Washington, D.C, and Author of “The Rohingyas:
Inside Myanmar’s Hidden Genocide” 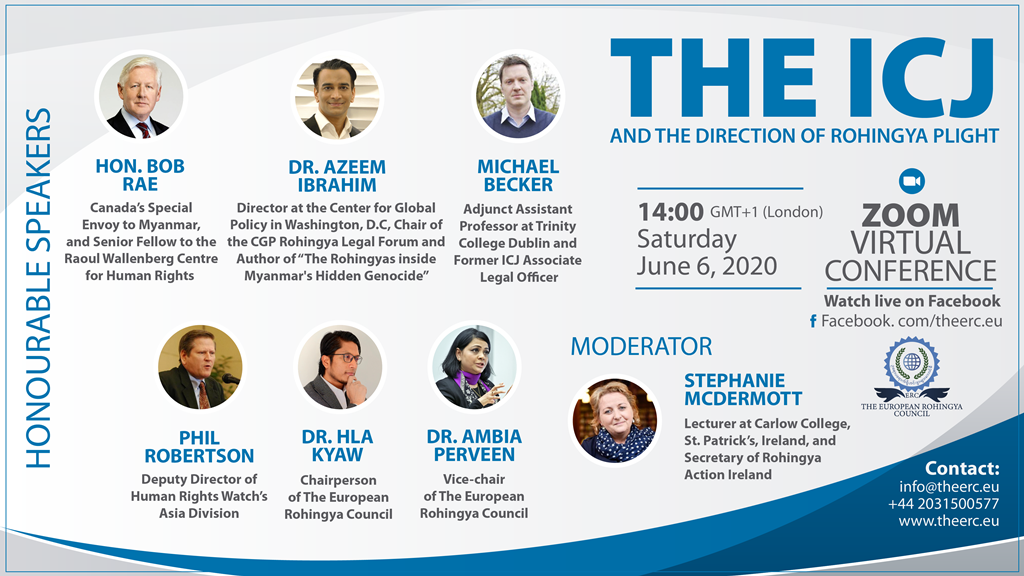 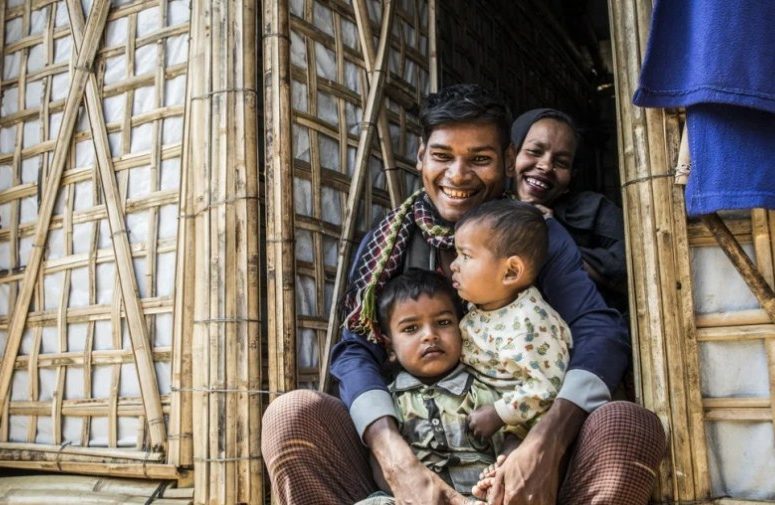 When Sara’s* seven-year-old son Mohamed* was snatched from the vast Kutupalong refugee settlement in south-east Bangladesh, she set out to find him on foot. END_OF_DOCUMENT_TOKEN_TO_BE_REPLACED 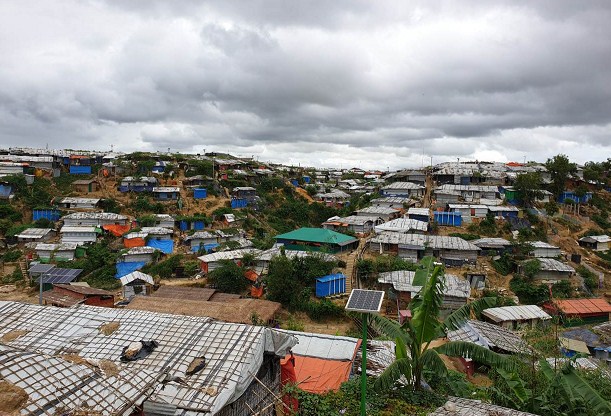 KUTUPALONG REFUGEE CAMP, Bangladesh,  (Thomson Reuters Foundation) – When Nazmin Nahar, a Rohingya refugee in Bangladesh, was offered a job in a garment factory by a distant cousin, she thought she had found a way to support her ageing parents.

But her relative sold her as a maid in Chittagong, 160 km (100 miles) away from her family in the world’s largest refugee settlement in southeast Bangladesh, where she was tortured and forced to work without pay. END_OF_DOCUMENT_TOKEN_TO_BE_REPLACED 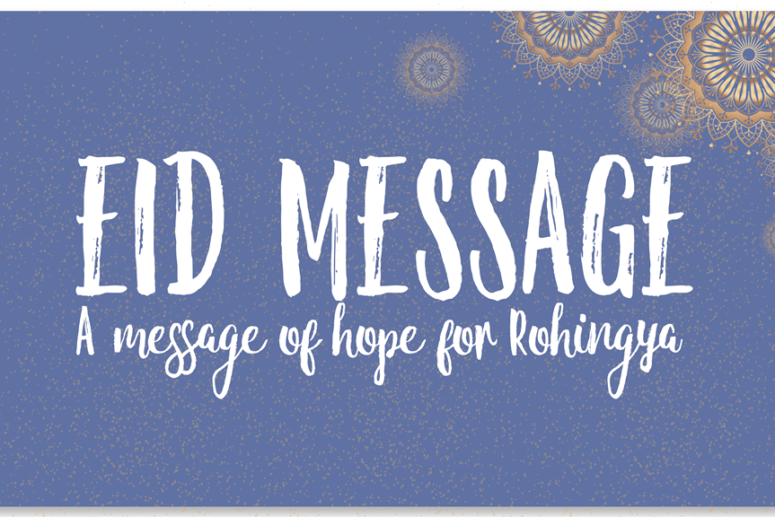 On behalf of the European Rohingya Council, I would like to convey Eid Mubarak to each and every Rohingya brother and sister, and Muslims around the world. END_OF_DOCUMENT_TOKEN_TO_BE_REPLACED 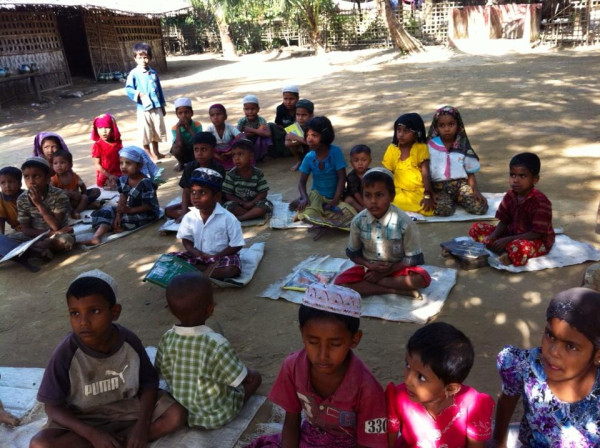 The European Commission is releasing €31 million in humanitarian aid to address the Rohingya crisis in Bangladesh and Myanmar.

“The Rohingya crisis is in its third year. It is more important than ever to maintain our support and not forget those that remain dependent on humanitarian aid to survive. We are committed to supporting both refugees and host communities in Cox’s Bazar, as well as to the vulnerable Rohingya in Myanmar. It will ensure that those most in need continue to receive life-saving assistance, while being protected from the effects of flood and other hazards”, said Commissioner for Crisis Management Janez Lenarčič. END_OF_DOCUMENT_TOKEN_TO_BE_REPLACED 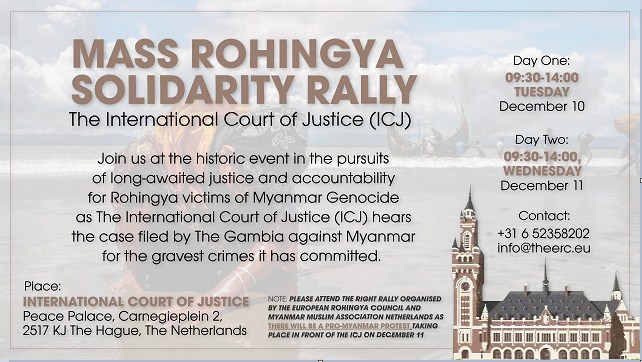 The European Rohingya Council (ERC) and Myanmar Muslim Association Netherlands (MMAN) is organising the mass rally in front of the ICJ to seek justice for the persecuted Rohingya community. END_OF_DOCUMENT_TOKEN_TO_BE_REPLACED 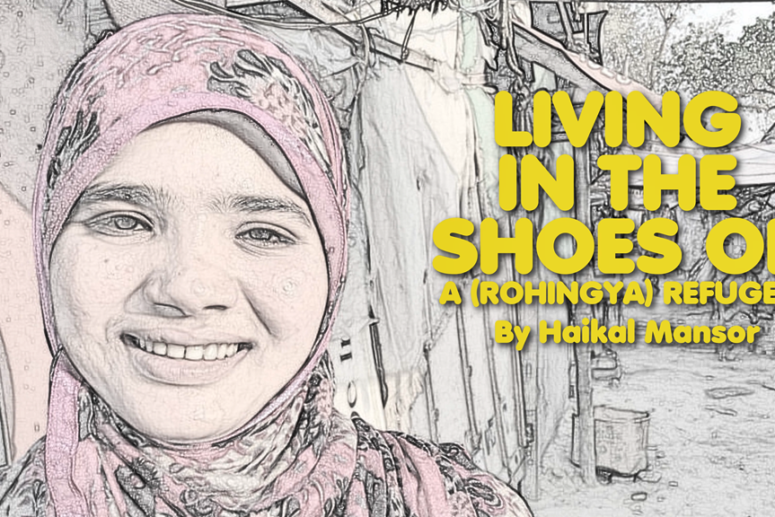 LIVING IN THE SHOES  A [ROHINGYA] REFUGEE 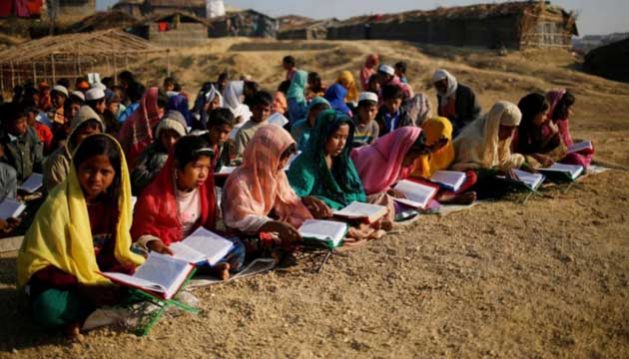 Mar 31 2020 – All around the world, the numbers are climbing. Each day registers thousands of new cases and lives lost. In Europe, now the epicenter of the pandemic, governments know that the worst is yet to come and are implementing increasingly restrictive measures to enforce social distancing and isolation. END_OF_DOCUMENT_TOKEN_TO_BE_REPLACED 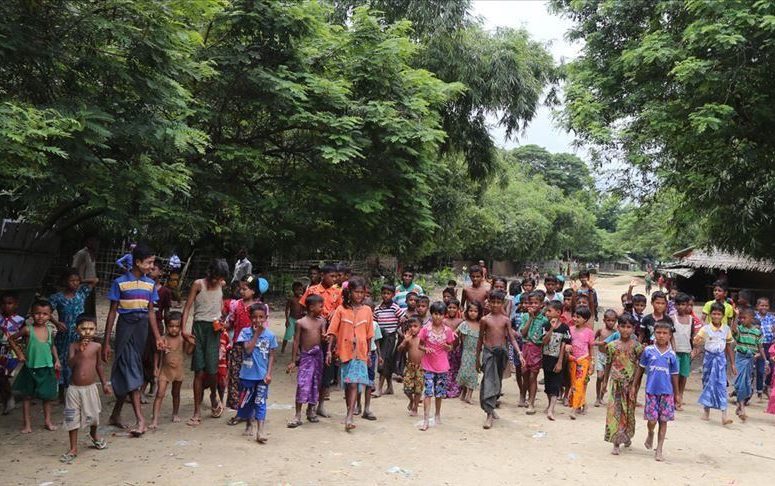 As thousands of Rohingya refugees continue to pour into Bangladesh
END_OF_DOCUMENT_TOKEN_TO_BE_REPLACED 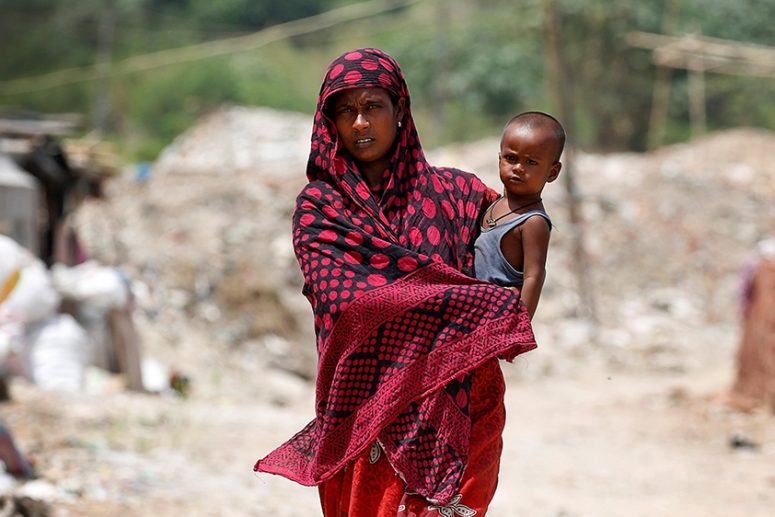 Thousands of Rohingya in India battle hunger as a coronavirus outbreak in refugee camps looms large.

Din Mohammad is doing everything possible in his power to keep his family and fellow Rohingya refugees healthy during a three-week lockdown enforced by the Indian government to fight the coronavirus. END_OF_DOCUMENT_TOKEN_TO_BE_REPLACED 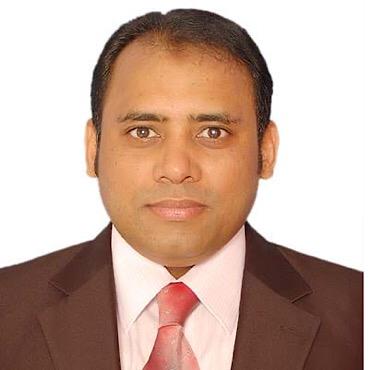 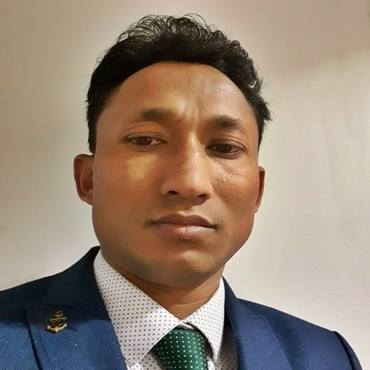 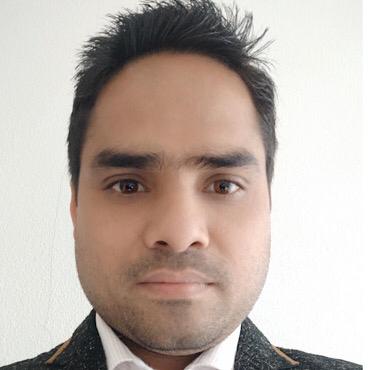 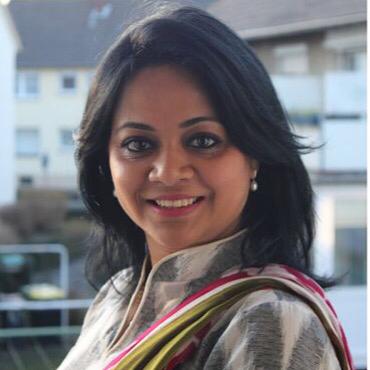 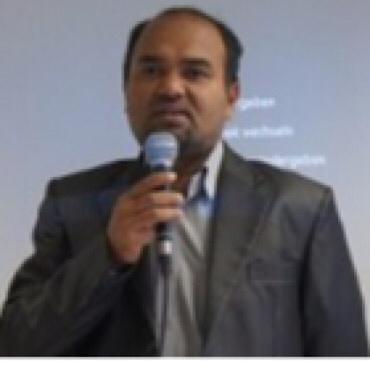 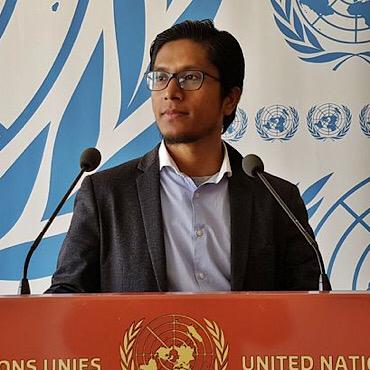 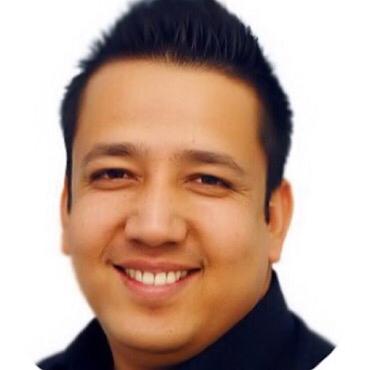 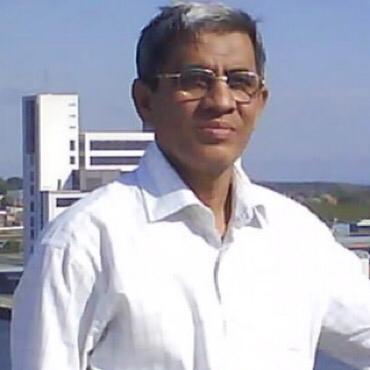