The first even on March 14, 2016, was moderated by Hanno Schedler of the German-based Society for Threatened People. Four distinguished speakers spoke on the Rohingya issue from various perspectives.

Matthew Smith, Director of the Fortify Rights, spoke extensively on Rohingya IDPs in Arakan and refugees in Thailand and other countries, and human right issues in Arakan. Mr. Smith stressed the appalling condition of Rohingya in detention center in Thailand, and the increased human right violations in Arakan by the Government of Myanmar, particularly after the landslide victory by the NLD in the recent national election. Mr. Smith described the persecution Rohingya and the major human right violations that has clearly risen to the level of genocide. “The crimes committed by the Government of Myanmar against Rohingya people amount to Genocide according to a number of independent researchers, including International State Crimes Initiative at Yale Law Clinic” Mr. Smith said. He called on the United Nations Human Rights Council and the international community to form a UN-mandated independent investigation commission to investigate the crimes against humanity in Arakan. “Rohingya people must be protected against the crimes committed by the government forces in Arakan, and there is no question that they are violating the law with total impunity” Mr. Smith state.

Dr. Wakar Uddin, Director General of Arakan Rohingya Union, provided the international perspective and the possible role of the new NLD-led government in Myanmar. Dr. Uddin emphasized how the International community has been instrumental in advancing the cause of Rohingya through its persistent efforts on alleviation of the situation of Rohingya has led to numerous positive outcomes at the international stage. On behalf of Rohingya people, he expressed his deep gratitude to various international NGOs, OIC, US Government, United Nations, and the European Union. Dr. Uddin discussed the potential for addressing the Rohingya issue by the new government of Myanmar, but cautioned the Rohingya community not to have unrealistic and untimely expectation from the new government. “We recognize that NLD has its own challenges while the Burmese military controls the Interior Ministry and Border Affair Ministry, plus the 25% military appointees in the legislature; however, we think that the government could possibly find a solution in Arakan only if it has the honest desire and a viable strategy ” Dr. Uddin pointed out. In conclusion, he called on the new government of Myanmar not to engage in inventing new name for Rohingya ethnic minority. “Permanently cease the Greencard scam Arakan, and renaming Rohingya people as ‘Bengali’ will not solve any issue; it is only counterproductive” Dr. Uddin stated.

Mr. Khairul Amin, the Chairman of the European Rohingya Council, spoke on the current situation on the ground in Arakan. He provided the details on the human right violations committed by the Myanmar Government forces, particular the BGP, and how it has been used as a tool for the persecution of Rohingya by the Government. “As we speak now, Rohingya people are suffering immensely in IDP camps, and in their own localities in Arakan; these are crimes against humanity, and the world’s genocide experts call it a genocide.” Mr. Amin stated. “It is undeniable fact, and it is happening in broad daylight” he further stated. Mr. Amin has indicated that if the international community does not take this crime seriously, the situation in Arakan will go from bad to worse. He also reflected the other speakers’ view that there may be some opportunities for dialogue and ethnic reconciliation among the people of Arakan, particularly the Rohingya, Kamen, and Buddhist Rakhine under the new NLD-led Government to address the problems in Arakan.

Dr. Maung Zarni, a scholar on Myanmar, described the very nature of the persecution of Rohingya by the Government of Myanmar. Dr. Zarni has referred to his personal experience while growing up in his own Buddhist community. He explained how the hate against Rohingya ethnic minority in his society was fueled by the policy of Myanmar military dictatorship that has led to first major operation in 1978 when hundreds of thousands of Rohingya were driven out of their homes. He also provided the accounts of how the crimes against Rohingya were institutionalized because of Rohingya people maintained a stronghold in Mayu district of Arakan along with their deep cultural and religious identities. Based on level of crimes against humanity, Dr. Zarni has indicated that it is clearly a genocide, more in a hidden form and slow burning nature. He further described it with an example of cancer where the human right and humanitarian issues faced by the Rohingya are the symptoms of the disease. He has articulated that the efforts made by the international community to solve the Rohingya issue is like treating cancer with basic pain killers such as aspirin or paracetamol. “The Rohingya issue has risen to a level of international crime, and it needs to be handled in a more urgent way – like urgent surgical operation” Dr. Zarni articulated. 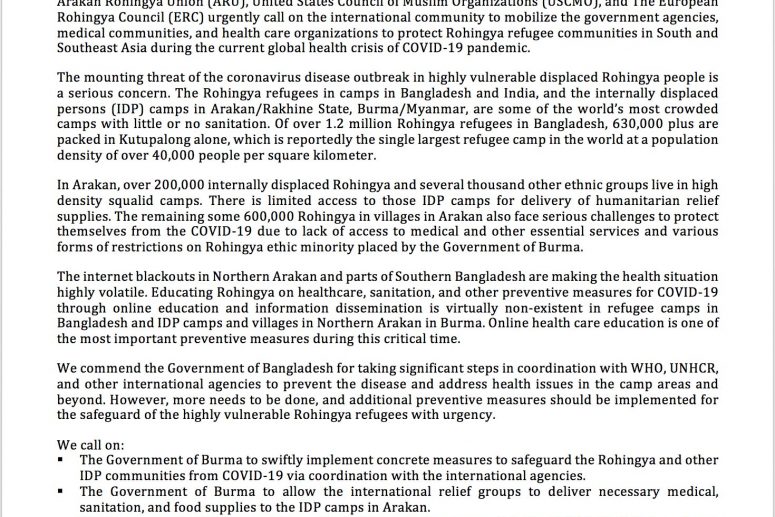